The Adventurers by Tom Roberts (editor)

In the years between the Great Depression and World War II, the all-fiction pulp magazines were flourishing on newsstands across the United States. Within their pages had been born many of the icons of popular culture that shaped the entertainment pleasures for generations to come, with names like as Tarzan, Zorro, and The Shadow.

One of the most prominent and popular was Doc Savage, the Man of Bronze, a physical superman with the mind of a genius. When sequestered in his hidden laboratory Doc Savage invented devices, potions and serums to cure needs around the globe. But with his crew of assistants, utilizing an array of gadgets of his own invention, he was a world adventurer battling an assortment of super villains.

Doc Savage, following The Shadow, were the earliest one-character magazines, shaping and defining a genre that came to be known as “the hero pulps.” Each had a host of imitators with names like The Black Bat, The Green Ghost, The Crimson Clown, or Don Diavolo. 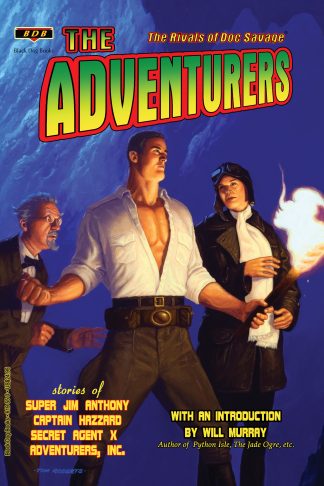 You're viewing: The Adventurers by Tom Roberts (editor) $17.95
Add to cart