The Decree of Allah by George E. Holt

The collected adventures of Mohamed Ali.

Mohamed Ali’s name is not to be trifled with. Some men dare call him a bandit­­—men who are not his friends. . . .

Mohamed Ali, a Moorish Robin Hood, bravely defends his country from becoming a subject nation to a European power, keeping alive in the hearts of the Riffian Berbers that spirit of independence which had kept them free for over three thousand years—free from all that had invaded and possessed parts or all of his country—all except for the hills and mountains of the Atlas Range, wherein the sons of Atlas acknowledge no master but their gods!

This is the manner of Mohamed Ali’s downfall—the story of those things which led to his outlawing, to the price set upon his head, to the long and unsuccessful pursuit of him—and to the bold exploits of himself and his friends and enemies. Exploits during which Mohamed Ali, outlaw, laughed greatly, and dared bravely, and relied upon the friendship of Allah for protection.

Now collected for the first time in book form are the complete adventures of Mohamed Ali, outlaw and Descendant of the Prophet, loved, honored and feared throughout the Anghera Hills. 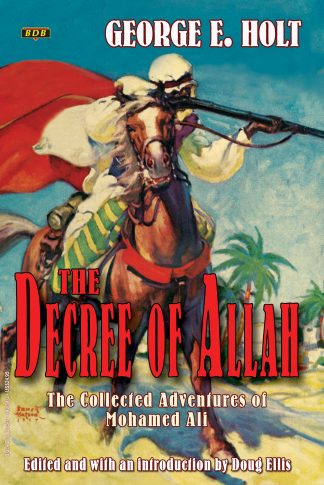