The Green Spider by Sax Rohmer

and Other Forgotten Tales of Mystery and Suspense

“Not to be missed.”—Dispatches From the Last Outlaw

—A prominent scientist-killed by a gigantic green spider . . .

—The mysterious mummy that looted a London museum . . .

—An “impossible” murder on the English moors… The modern pirates who plundered the idle rich of Southborne . . .

—A weird malady that tormented denizens of a country estate . . .

—The most fiendish torture ever devised by the devilish Dr. Fu Manchu!

These and more thrilling adventures await the reader in these thirteen rare works of intrigue by the incomparable Sax Rohmer collected in The Green Spider and Other Forgotten Tales of Mystery and Suspense—including four stories never previously published in the United States! 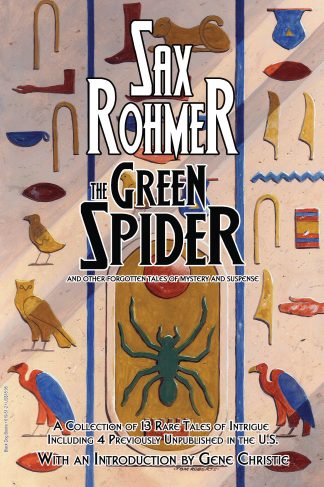 You're viewing: The Green Spider by Sax Rohmer $18.95
Add to cart