The Leopard Couch by Sax Rohmer

and Other Stories of the Fantastic and Supernatural

Mystery and mayhem! Sax Rohmer at his unparalleled best.

The leopard couch of eternal memories . . .

The severed hand of a desert sheikh—and its frightful vengeance . . .

An old hag damned to misery, until she can acquire a thousand kisses . . .

The mysterious black cat that knew too much . . .

A Christmas house party—with Satan himself as a guest?

These and more thrilling adventures by the incomparable Sax Rohmer await the reader in The Leopard Couch and Other Stories of the Fantastic and Supernatural—including four stories never previously published in the United States!

With an introduction by F. Paul Wilson, Lifetime Achievement Award recipient from the Horror Writers of America

Selected and with editorial notes by Gene Christie. 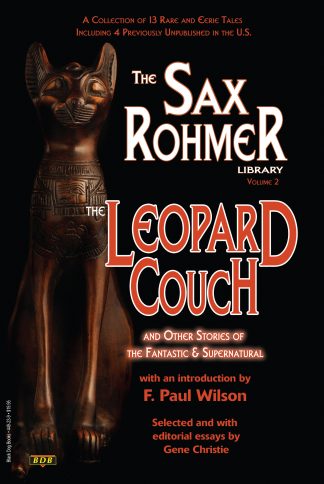 You're viewing: The Leopard Couch by Sax Rohmer $19.95
Add to cart