A Tale of Classic Adventure!

“A superb entry in Black Dog Book’s catalog and among my favorites.”—Dispatches From the Last Outlaw

From the pages of The Cavalier comes this forgotten tale of adventure.

Three men journey into the heart of Borneo, fighting both natives and the jungle itself, to find the Great Parong of Buddha and other fabled treasures missing for more than two centuries!

We sat conversing late that evening. The story that Gung had told us was rioting madly in our brains. The Chalice of Everlasting Fire was always before our minds. We questioned the Hindu concerning the great sword with the emerald handle that was called the Parong of Buddha. There were a thousand legends told concerning that sword. We prayed Gung’s information would take us back to the place where Courtney and he had purloined the chalice from the cave that was close to the kampong of the Spotted Panther. It wasn’t a treasure hunt that we had set out upon. We were searching for something that was beyond price. The Great Parong had been plaited into the history of the Orient so that it possessed a value that was ten thousand times greater than the mere value of the gold and precious stones of which it was composed.

“You cannot put a value upon it,” said Chico, on that evening we camped at the Place of Evil Winds.

“Value?” cried Templeton. “If it were possible—if it were possible, I say, to bring the Great Parong of Buddha to Benares and lay it in the Mosque of Arungzebee, there would be a revolution in India inside of seven days! Our minds were made up . . .

“The pacing is breathless.” 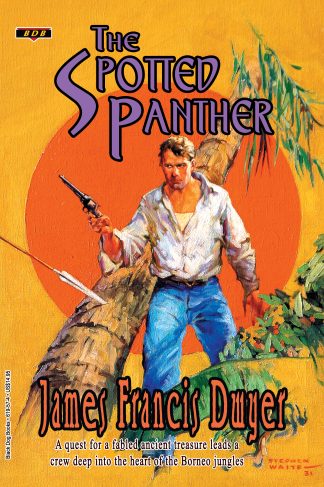 You're viewing: The Spotted Panther by James Francis Dwyer $14.95
Add to cart