Customer matched zone "United States (US)"
View cart “The Skull Squadron by Lester Dent” has been added to your cart.

The Voice of Kali by Sax Rohmer

Collected for the first time comes this volumes of strange happenings and weird mysteries . . .

The Game’s afoot—and Harley’s on the case!

Paul Harley, the private investigator of Chancery Lane, and star of Rohmer’s novels Bat Wing and Fire Tongue, embarks to uncover the truth behind seven odd and unexplainable murderous events, including the short novel, “The Voice of Kali,” a work out-of-print for nearly ninety years.

With an introduction by William Patrick Maynard, author of The Destiny of Fu Manchu and The Terror of Fu Manchu.

“Thanks to Gene Christie, we now have three volumes of lost or hard to find Sax Rohmer stories to enjoy.” 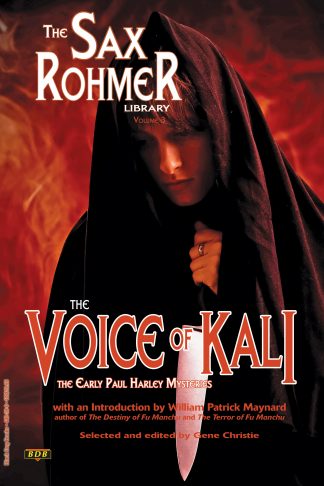