Customer matched zone "United States (US)"
View cart “Claimed! / Avalon by Francis Stevens” has been added to your cart.

“Claimed! has always been a favorite of mine.”—A. Merritt

From the pen of Francis Stevens, the Grand Mistress of Dark Fantasy, come two classic novels of weird fascination.

The Atlantic vomits forth a stream of boiling lava and a new land mass is formed. Crewmen from a passing ship investigate and are puzzled to discover a mysterious blue-green box bearing an enigmatic inscription on this virgin island. The box passes through multiple hands, and a bizarre fate seems to follows all those who acquire it, eventually leading to a confrontation as the true owner comes forth to claim this mystical ancient artifact!

What dark mystery shrouds this island community off the Carolina coast? What black shadow is draped over Cliff House, the ancestral home of the Avalon family? Uncover the startling revelations in this tale of conspiracy and long-buried secrets.

Includes the first photograph of Francis Stevens/Gertrude Bennett to ever see print! 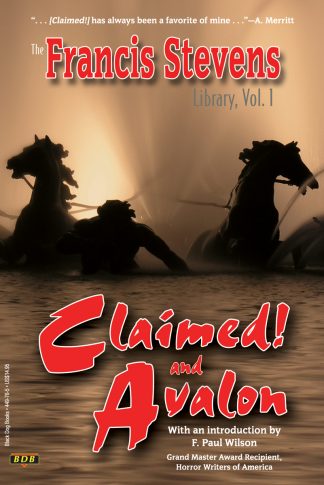 You're viewing: Claimed! / Avalon by Francis Stevens $14.95
Add to cart