L’Atlantide (The Queen of Atlantis) by Pierre Benoit

Can any man resist the lure of the Queen of Atlantis?

Can any man resist the allure of the Queen of Atlantis?

Two French soldiers journey into the middle of the Sahara and stumble upon the ancient kingdom of Atlantis. Eventually desiring to leave and report their findings to the outside world, the duo discover they cannot escape the beguiling powers of the Queen of Atlantis, dooming them to a lifetime of loving and serving the eternal queen!

Pierre Benoit’s award-winning novel (winner of Le Grand Prix du Roman) about the Lost Atlantis in the heart of the desert is a classic fantasy tale of exploration in the tradition of H. Rider Haggard and Rudyard Kipling.

The Black Dog Books edition marks the first book appearance of this 1919 translation, as it originally appeared in Adventure magazine.

With an introduction by Doug Ellis. 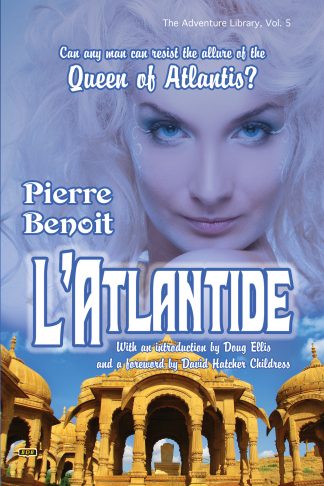 You're viewing: L’Atlantide (The Queen of Atlantis) by Pierre Benoit $19.95
Add to cart