Raider of the Seas by Warren Hastings Miller

Captain Jim Colvin and the Log of the Pulo Siburu

Operating the waters from the Indian Ocean to the South China Seas, Captain Jim Colvin, aided by his partner, Chief Engineer Johnny Pedlow navigate the tramp steamerette Pulo Siburu on a string of adventures.

Never above a little smuggling themselves, the Pulo Siburu holds its own against hostile natives, Chinese pirates, smugglers and the underworld lords of Singapore.

“For the reader looking for adventure stories that don’t pretend to be anything else, written by an author who knew ships as well as he did the region and its inhabitants, Raider of the Sea is a great book, sure to send you to the publisher (Black Dog Books) looking for more of the same.”

Throughout his life, Warren Hastings Miller (1876-1960) led a diverse existence, first as an engineer, US Navy officer, outdoorsman, sportsman, magazine editor and later an author. Engineering sent him journeying throughout Europe, the Mediterranean and South East Asia. As an officer in the US Navy he learned the workings of ships and the men who served on them. And his love of the great outdoors lead to his role as editor of Field and Stream magazine. All these subjects are combined with great accuracy and drama into his fiction which he sold to both pulp and slick magazines alike. 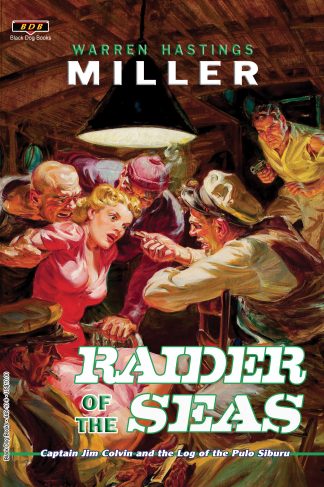 You're viewing: Raider of the Seas by Warren Hastings Miller $10.00
Add to cart